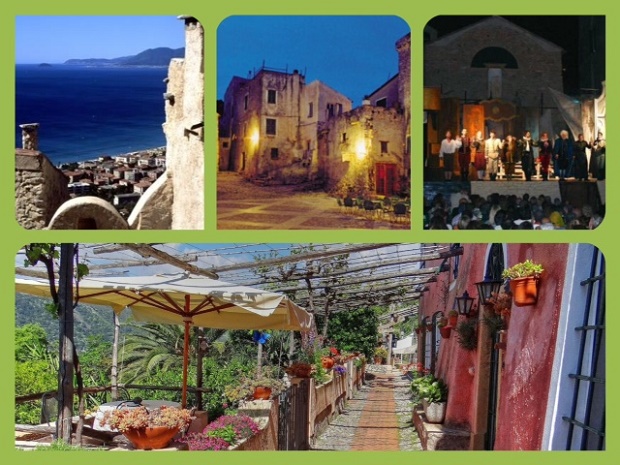 Borgio is an ancient village a stone's throw from the sea. It owes its name to the two centres which combine it : Borgio along the coast( at the mouth of the Bottassano stream) and Verezzi in a higher position (200 mts above sea level) with its four saracene hamlets.

The first records relative to the history of Borgio go back to 181 AD during the Roman period concerning the only conflict between the Ingauni Ligures and Roman armies, which took place on the plain between Borgio and Pietra Ligure at the foot of Mount Grosso because of continuous provocations by the Ligures. The communicating road between Borgio and Verezzi was inaugurated in 1885, and the two villages were united as a sole district in 1933.

In Borgio you can admire the Shrine of Buon Consiglio in the cemetery. The church, which was begun by the Benedictine monks around the IX century, has three aisles and marks a lovely example of Romanesque-Gothic architecture: inside are splendid remains of fifteenth-century frescos,while the main altar, in Baroque-style, was built in 1721.

The church, initially dedicated to San Pietro (until 1808), later became the Oratory of Santo Stefano as such the seat of the confraternity of the same name. In1960 Pope John XXIII had the Church erected to a Shrine and dedicated to the Madonna del Buon Consiglio (Our Lady of Counsel)

Inside the area where the old sixteenth-century castle , built as a defence against Saracene invasions, stood, there is now the Church of San Pietro which was built at the end of the XVIII century in neo-classic style. The parish church, whose outside walls are the same as that of the fort, is one-aisled with six lateral chapels. Among the most significant works of art is the large canvas on the apse depicting San Pietro, the choir in hardwood and the antique organ dating back to 1890.

Nearby, one can observe the Torrione, an ancient watch-tower dating back to 1564, surrounded by the ancient city houses.

Going up to the small village of Verezzi, behind Borgio, you can admire the splendid view over the four Saracene hamlets of: Poggio, Piazza, Roccaro e Crosa.

The latters preserve the ancient environmental and architectural characteristics of the hillside hamlets of the Ligurian Riviera. In the evocative community of Piazza there are the namesake churches and an interesting rectangular defence tower. From the small square, which has hosted in the summer season thespian events, there is one of the most beautiful panoramic terraces overlooking the sea of the Riviera.

East of this place is the grotto of Valdemino, coming from a karst phenomenon of chemical erosion and underground rainwater. It was explored for the first time in 1945 and opened to the public in 1970. The grotto is rich in solid stalactites and stalagmites of particular interest: divided into branches which expand for about 5 kms but only open to researchers. An 800mt route is open to visitors who will find it very interesting for its rich polychromy characterized by a variety of stalactites and stalgmites which gives a fantastic atmosphere to the surroundings.