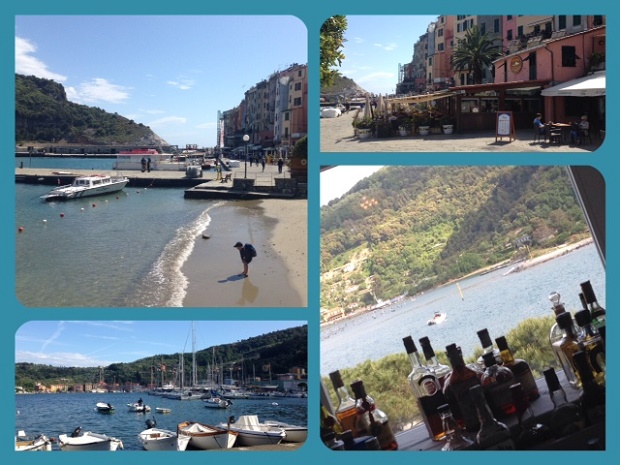 Porto Venere, also written Portovenere, is the smallest town of the province of La Spezia.

Since 1997, together with the Palmira islands, Tino, Tinetto and the Cinque Terre it has been part of the UNESCO environment heritage.

It rises on the southern end of a peninsula which forms the western shore of the gulf of La Spezia called the Gulf of the Poets . At the far end of the peninsula are the three islands of la Palmaria, il Tino e il Tinetto. The two hamlets of Fezzano and Le Grazie as well as the archipelago formed by the islands of Palmaria, Tino e Tinetto are part of the territory which measures a total of 7,66 km2.

The beaches are renowned for the crystal clear waters and the strong sea current of the Ligurian sea.

The Villa romana of Varignano, in Le Grazie, dating back to the first century AD here you can visit the Antiquarium.

The Museum of the church of San Lorenzo.

The Doria castle of Porto Venere, built in 1161 high up on a rock and dominating the seaside village, was originally a fortress and is considered one of the most majestic pieces of military architecture of the Republic of Genoa in east Liguria.

Among the natural areas of the territory of Porto Venere are the famous grottos of Byron ( Arpaia cove), Azzurra (semi submerged) and Tinetto; the cave of the Colombi and the wall of Tino; the shoal of Dante and the Piccola e Grande caves.

The grotto of Byron, named after the English poet George Gordon Byron is worth visiting also to take photos because of the glimpse you get of mythology.

The church of San Pietro is known for its ancient architecture and position , hanging from a cliff and offering a magnificent view of the landscape. It is made up of two buildings, one in gothic style and the other in a much older romanesque style.

The church of San Lorenzo built in romanesque style by the famous confraternity of the Maestri Antelami and consecrated in 1130 by Pope Innocenzo II. Inside are preserved numerous works of art.

Sports and Excursions in Porto Venere:

From this wonderful place one has to take a boat so as to admire, from the coastline, the beautiful green Liguria which has inspired many and more. There are numerous boat trips to choose from and it is also possible to hire a boat.

Many events take place during the summer months, events that connect bathing by day and music by night.

The wood trail is a characteristic of Porto Venere and is accessible by the napoleonic road between La Spezia and Porto Venere on the bend just before Fezzano village. You can get there by bus or car, bus no 11 or P. The trail offers a diverse environment on a short itinerary. At the bend of Fezzano you take the second steps on the right (Via Ruggeri and then Via Alloria) until Via Simonetta Cattaneo, you cross over and go on for about 50mts up to the crossroads, take the path on the left.

On the folowing site are suggested itineraries from trekking lovers:
it.wikiloc.com/percorsi/outdoor/italia/liguria/portovenere

Search and book hotels in Portovenere