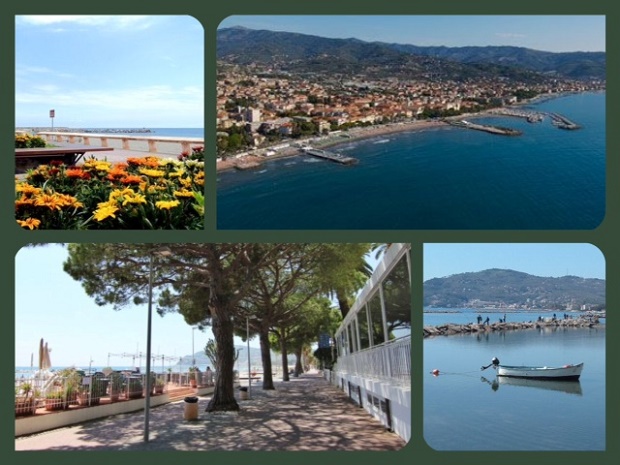 San Bartolomeo al Mare is the tenth town of the province by number of inhabitants which is 3,125. It is situated on the Riviera di Ponente, occupying the lower part of the Val Steria on the western side of the Riviera dei Fiori in the province of Imperia. Together with other seven towns and villages it is part of the district of the Dianese Gulf.

The town territory apart from the town itself, includes the districts of the district of Chiappa and the built up ares of Pojolo, Rovere and Pairola on a surface of 10,85 sqkm. Also part of the town district are the historic hamlets of San Simone, Richieri, Molino del Fico, Rocca, Steri, Tre Molini e Freschi, Cà de Conti, Cà de Calvi, Viali, San Biagio, San Rocco, Case Battine e Case Bosiai.

The church of San Bartolomeo situated in the original village of the same name and from which the town gets its name and also seat of the Town Hall. The original structure dates back to the middle ages ( it is thought to have been founded by Benedictine monks), but the tremendous earthquake of 23 February 1887, which traumatized the entire Gulf, erased forever the paramount architectural style except for the XIV century belfry. However,t he present building goes back to an earlier period before the telluric phenomenon.

Inside are preserved valuable works of art among which a marble baptismal font of 1483. Among the paintings there is the polyptych of San Bartolomeo and the saints by Raffaello and Giulio de Rossi, 1562, as well as two paintings of the Virgin Mary.

San Bartolomeo near Cervo and Diano Marina ,in addition to its own sports facilities ,offers tennis courts, football pitches and volleball courts a short distance away.

Thanks to the hinterland rich in roads, paths and trails, there are many possibilities for all kinds of activity in contact with nature like those suggested on this site:
http://it.wikiloc.com/percorsi/outdoor/italia/liguria/san-bartolomeo-al-mare

The Rovere Fair is one of the most ancient fairs in the Ponente Ligure and has always had an outstanding attendance by visitors.It has been held annually on 2 and 3 of February in the neighbouring public area of the Shrine of our Lady of the Rovere for centuries. On the same dates the Purificazione is solemnly celebrated. In this big open market there are stalls and stands of every genre, like animals, both pets and work animals, seeds, plants, agricultural products as well as antiques and handicraft.

For about five years the "Natale d'estate", (Summer Christmas) is held on 25 August in via della Resistenza (the area nearest to the beach). It is a real fair , full of stalls exhibiting their wares of handicraft and homemade typical food products. Santa is there in the early evening with his sleigh in the snow (artificial ,of course), all this creates a total Christmas atmosphere.