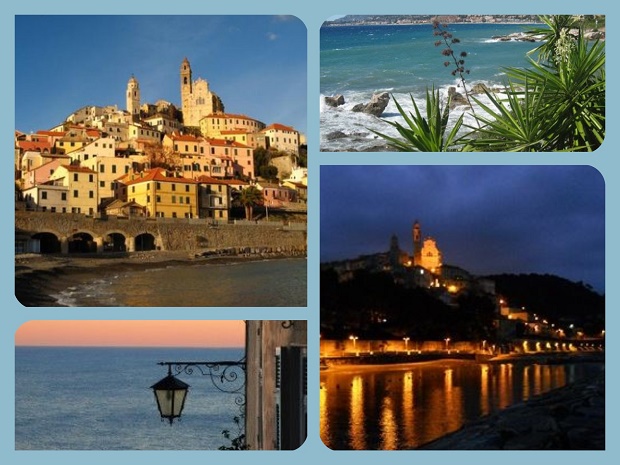 Cervo is a small town of 1,128 inhabitants, its territory, (surface of 3.9sqm), is located in the final stretch of the Cervo stream, along the Steria valley which is delimited in the north and in the east by the Merula stream valley, in the province of Savona, and by the Evigno basin along the opposite side. Together with other seven towns it is part of the district of the Dianese Gulf.

The historic nucleus of Cervo, completely resructured safeguarding the original characteristics of the hamlet, rises from the slopes of the hills in front of the sea.

The “Franco Ferrero” Ethnographic museum of The Ponente Ligure . The museum halls, dedicated to the ethnography of the Riviera del Ponente are located in some of the rooms of Clavesana Castle. The exhibition centre, set up in the 1980s, presents scenes of daily life in the nineteenth century relative to craftsmanship, agriculture, seafaring and home life, with particular equipment animated by mannequins dressed in period costmue.

Clavesana castle was a fortress located on the highest point of the historic centre in Piazza al Castello dedicated to Saint Catherine of Alessandria, only later, around XIII century, did it become an aristocratic castle and dwelling to the Marchese of Clavesana , lord of the territory, absorbing into the consruction an antecedent romanesque tower. The building was built entirely in stone, ,rectangular in plan and completed with four towers on the corners of the structure.

The church of St John the Baptist with a single aisle, is composed of a number of side altars and chapels. The first,on the right, is named san Nicola da Tolentino where there is a canvas of an unknown artist depicting the miracle worker saint; the following one is dedicated to the Souls in Purgatory fulfilled by the genovese sculptur Bernardo Gaggino in 1772 , here ,preserved in the large recess ,is the wooden group of St John the Baptist(XVII century) by Marcantonio Poggio. There are also the statues of the Madonna del Rosario and that of the Immaculate Conception, the latter work by Anton Maria Maragliano.

On the seaside there are various structures to practise sports like tennis and football.

In addition to those mentioned there are many more itineraries to do in the green hinterland of this beautiful village.

There are daily mini-cruises along the coast from the nearby Diano Marina , they go as far as the island of Gallinara in front of Albenga; for those who are more seafaring there is “Whale Watching”. Each day there is a motor vessel from Imperia or Andora which takes you further out to The International Sea Sanctuary where you get to see whales and dolphins in their natural habitat.

“The International Festival of Chamber Music of Cervo”, founded in 1964 by Sandor Vegh, a hungarian violinist, who, sensing the acustic potential of the central Piazza dei Corallini, dominated by the parish church of San Giovanni with its concave facade, started the Festival which takes place every year in July and August with open-air concerts of classical music in the evening played by musicians from all over the world among which, over the years, artists of international fame.

The Fair of Saint catherine of Alessandria, the last Sunday of November.

"Cervo Ti Strega" is the title of this event beacause of the fact that Cervo was one of the towns selected for the presentation of the books participating in the 2014 “Strega Book Awards”.

Search and book hotels in Cervo